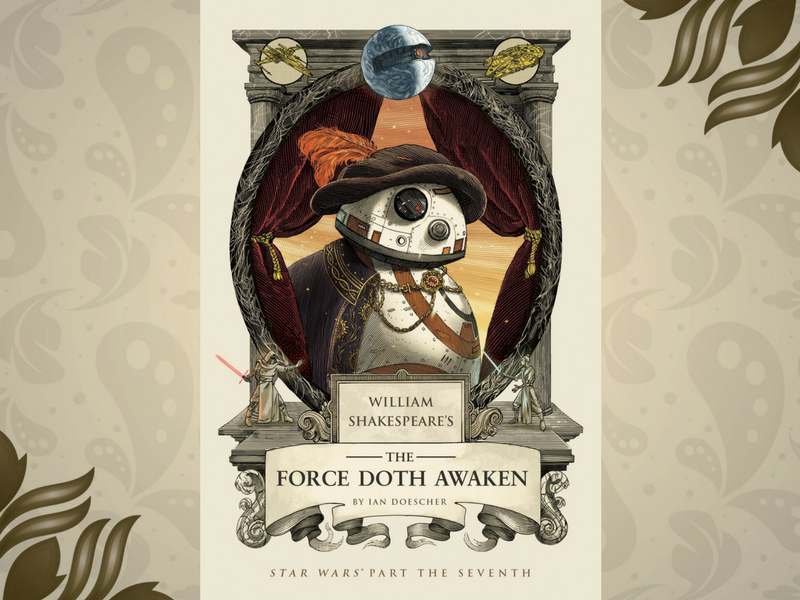 And thus I persevere. Prey, know my name:
Nearby, the sun shines bright; I am its Rey.
Rey, The Force Doth Awaken

I am inclined to like ideas that sound absurd on premise. It is always thrilling to see someone’s crazy idea succeed because it reminds me that any idea in the whole universe can be transformed into something for someone else to enjoy.  I was instantly sold when I found a brand new book on the shelf that imagines Star Wars: The Force Awakens as a play by written Shakespeare.  I couldn’t wait to see where this off the wall premise would take me!

The Force Doth Awaken by….Shakespeare as transcribed by Ian Doescher is a surprisingly true to form reimagining. Doescher works magic, convincing you that this is by the bard himself, from a list of cast members with brief character descriptions, through stage directions listed after bits of dialogue, to even the simple woodcut illustrations sprinkled throughout detailing how things would actually look (BB8 has a feathered hat!).  It doesn’t matter if you’re a fan of Shakespeare or just someone with passing interest, you will cackle seeing familiar scenes from the movie ‘shakespeared’.

Even if you have no interest in Shakespeare, it is still a fantastic book for those who enjoy the ever popular Star Wars series. Extra scenes have been added for the sake of drama, like a soliloquy by Leia about how she will never abandon her son no matter what atrocities he has committed…or for the sake of comedy as in the exchange between a veteran Stormtrooper and a new recruit about how Rey’s adventures are totally different from Luke back in A New Hope… no matter how many similarities. Once you get past the novelty of the idea, the book is surprisingly deft in how it expands the story in multiple directions. Plus there’s a Hamilton the Musical reference which is unexpected and amazing. I dare you to find it!

I recommend Star Wars: The Force Doth Awaken to Star Wars fanatics, Shakespeare aficionados, and anyone who enjoys something a bit out of the ordinary.