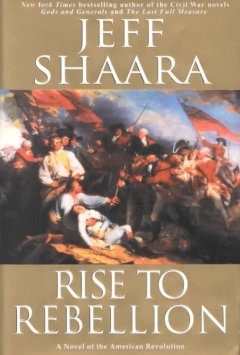 After becoming interested in the new musical Hamilton, I was curious if perhaps history was more interesting than I found it to be in school. Together with the exciting book cover image, I was cautiously optimistic when I picked up Jeff Sharra’s historical novel Rise to Rebellion. Much to my surprise, this unknown-to-me author wrote something that did what 16 years of American education couldn’t do: He wrote a book that made me interested in American History.

Jeff Sharra masterfully pulls back the curtain on key events, beginning with the Boston Massacre through the signing of the Declaration of Independence. What makes this book stand out is the way that Sharra shifts narrators in each chapter. In one chapter, we follow along with John Adams as he writes to his wife about the first Constitutional Convention and in the next, we find ourselves with Benjamin Franklin as he is put on trial for leaking English royal correspondence to the colonies. The author doesn’t just recite facts, he entwines the history with a glimpse into the thoughts and vastly different viewpoints of the historical figures. It seems like a key priority for Jeff Sharra to take the glorification from names such as George Washington and Paul Revere and instead present them as real people, with real thoughts and distinct motivations. We delight in learning not only what they did, but who they were. Seeing the people behind the events brought the history alive in a way that never happened for me in school. I now know more about why these events were important at the time and how they still resonate today.

Further, I really appreciated that some of the chapters were narrated from the perspective of British soldiers. Reading and seeing the perspective of the “other side” helped explain why the English wanted to tax the colonies, and did a fantastic job humanizing the British soldiers. Through masterful writing, Jeff Sharra presents both sides in a realistic and human light. By ripping away the traditional good versus evil veneer, he reminds us that the founding fathers were real people with their own clashing personalities, motivations, and issues and this is what elevated his book to a true masterpiece for me. I highly recommend it!