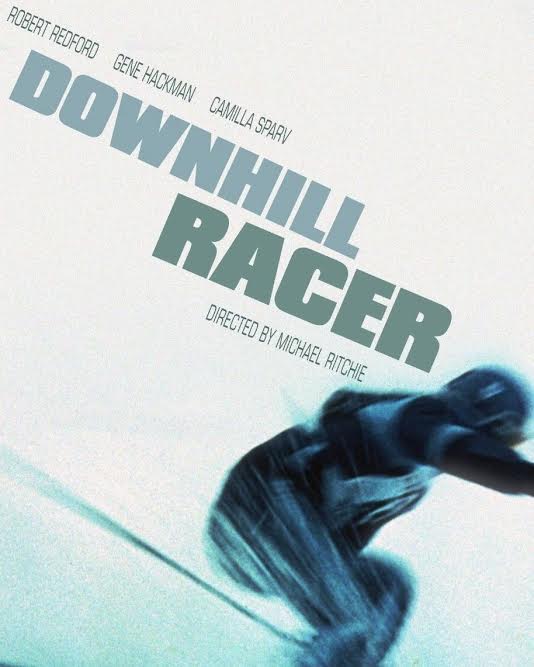 Downhill Racer (1969) was the work of four notable talents – actor Robert Redford, director Michael Ritchie, writer James Salter, and cinematographer Brian Probyn. Together, these four men welded the film’s steely attitude and astonishing look. Racer began life as a pet project of Redford’s, who selected writer James Salter (The Hunters) to write the screenplay. As developed by Redford and Salter, ambitious skier David Chappellet is not a team player. Much to the concern of old-school coach Eugene Claire (Gene Hackman), David’s single-minded strive to be among the famous sports champions is more important to him than team comradery. With his defiant, anti-authority personality, David Chappellet ranks among the antiheroes common in Hollywood movies from 1967 to 1975 – Clyde Barrow in Arthur Penn’s Bonnie and Clyde, Ben Braddock in Mike Nichols’s The Graduate, Wyatt and Billy in Dennis Hopper’s Easy Rider, Hawkeye and Trapper in Robert Altman’s M*A*S*H, and R.P. McMurphy in Milos Forman’s One Flew Over the Cuckoo’s Nest.

Downhill Racer was Michael Ritchie’s debut as a feature film director. Ritchie had an unconventional, unique approach to shooting scenes. In a style akin to documentary-type filmmaking, Ritchie worked with cinematographer Brian Probyn on capturing some amazing images – from the freeze-frame shots of skiers in the opening credit sequence, to the beautiful Alpine scenery that adorns much of the film, to the awesome climax. Ritchie would go on to direct many other sports-related films – baseball in The Bad News Bears (1976) and The Scout (1994), football in Semi-Tough (1977) and Wildcats (1986), and boxing in Diggstown (1992). Much like his contemporaries Hal Ashby, Bob Rafelson, Peter Bogdanovich, and William Friedkin, Ritchie achieved much success in the 1970s.

Commended for its dedication to authenticity by real-life skiers, Downhill Racer is also a rather good character study boosted with some impressive kinetic imagery. This should make the film appealing to viewers with only a passing knowledge in skiing. Staff member review by Josh D.