As Chimney Sweepers Come to Dust by Alan Bradley 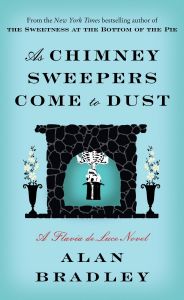 For as long as I can remember I have loved reading mysteries. When I was younger, I knew exactly where the Nancy Drew and Bobbsey Twins books were located in the children’s library. As I grew older, I developed an interest in chemistry and science.  One series of books I have recently enjoyed is Alan Bradley’s Flavia de Luce mysteries which combine my two interests of mystery and chemistry.

I recently finished reading the seventh books in the series, As Chimney Sweepers Come to Dust, which centers around the adventures of the book’s twelve year old heroine, Flavia de Luce. By the end of the previous book, Flavia has learned some pretty interesting facts about her family; her mother in particular. Just when she thinks she is beginning to understand her family, she is sent from England to Miss Bodycote’s Female Academy, the boarding school that her mother once attended in Canada.

As usually happens, Flavia is quick to find a dead body and begin the task of finding the killer. Back in England, she usually manages to solve the mystery with the help of her knowledge of chemistry and her father’s right-hand-man, Dogger. All the while avoiding being tortured by her older sisters and dishing out her own revenge when they do manage to get the best of her, and flying around the countryside on her trusty bicycle, Gladys, looking for clues. But, this time in faraway Canada, Flavia is forced to rely on her own wits.

I would suggest if you haven’t read the books before, to start with the first one, The Sweetness at the Bottom of the Pie. You won’t want to miss out on watching Flavia grow up.