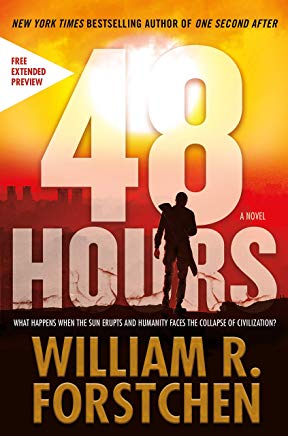 From the New York Times bestselling author of the smash hit One Second After series comes 48 Hours, a nail-biting and prescient thriller about a solar storm with the power to destroy the world’s electrical infrastructure.
In 48 hours, the Earth will be hit by a Coronal Mass Ejection (CME) from the Sun, a geomagnetic storm that has the power to shut down and possibly destroy the world’s electrical infrastructure. To try and prevent permanent damage, everything goes dark prior to the hit: global communications are shut down; hospital emergency generators are disconnected; the entire internet, media broadcasting, and cell phone systems are turned off. Will the world’s population successfully defend itself in the wake of the CME, or will mass panic lead to the breakdown of society as we know it? William Forstchen is at his best in 48 Hours, a tale of the resilience of American citizens when faced with a crisis.

William Forstchen’s books are some of the best among the apocalypse fiction genre. His books are realistic and packed with detail. They are fictional adventures that could actually happen. You get emotionally attached to the people at the beginning of the book and then Forstchen draws you into the plot. 48 Hours was well written and moved at such a fast past that  I could not put it down.